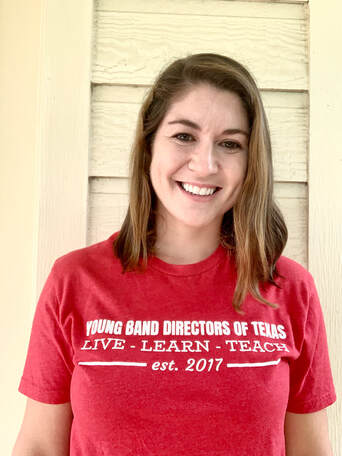 Originally from El Paso, Texas, Amanda went to Texas Tech University where she majored in Music Education. While at Tech, she had the honor of serving as head drum major in the Goin' Band from Raiderland. She is currently working on earning a masters degree in Music Education through distance learning with Texas Tech.

Amanda Blackstone is the founder and executive director of Young Band Directors of Texas, a nonprofit organization that works to provide community and reduce burnout in young directors. 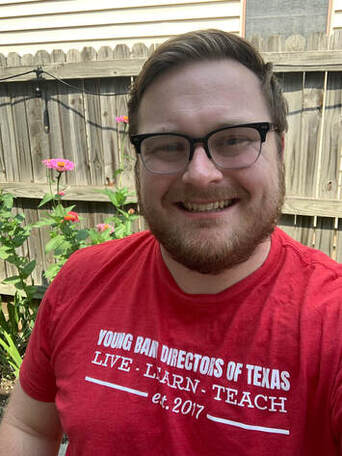 Aaron Beaver - President
Aaron Beaver is currently an Assistant Band Director at Floresville High School in Floresville, TX. He received his Bachelor of Music Education from West Texas A&M University and his Master of Music in Orchestral Conducting at the University of Nebraska. Aaron has worked as an educator, performer, and conductor in various parts of the country including Texas, Nebraska, Iowa, Indiana, and Connecticut.

Along with assisting with the Mighty Tiger Marching Band, Aaron teaches the Non-Varsity Concert Band, Applied Music, and beginning low brass at Floresville Middle School. Outside of school, he has been the resident conductor with Equinox New Music Collective, a group dedicated to the performance and outreach of new music, and is currently serving as the YBDT Advisor Program Assistant.

​When he’s not preoccupied with school and music, Aaron enjoys cooking, reading, traveling, exercising, and spending time with his dog, Sammy.

Amanda Enriquez - Vice President
Amanda Enriquez is currently in her eighth-year teaching at Edinburg High School and Barrientes Middle School where she conducts the Concert Band and teaches the flute and saxophone students. Under her direction the Concert Band has received superior ratings and the flute and saxophone students have had success in the All Region and Solo and Ensemble contests.

​Amanda has a passion for flute and continues to perform with the McAllen Town Band and the Vientos Del Sur Flute Ensemble.  Her professional memberships include the Texas Music Educator Association, the Texas Bandmasters Association, Young Band Directors of Texas and the National Flute Association. 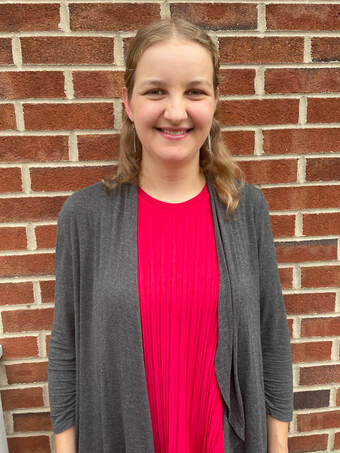 Melinda Coleman - Treasurer
Melinda Coleman is entering her third year as an Assistant Band Director at Lubbock-Cooper High School in Lubbock, TX, where she directs the Concert Band and assists with the Pirate Pride Marching Band.

A native of Palatine, Illinois, Melinda graduated from the University of North Texas in 2020. While at UNT, Melinda played clarinet and bass clarinet with the Concert Band, Wind Ensemble, and Symphonic Band and trumpet with the Green Brigade Marching Band.
​
Outside the classroom, Melinda is passionate about bringing music to the community. As a college student and teacher, she has performed with various community bands, organized instrument petting zoos, and brought chamber ensembles to perform at nursing homes. Melinda’s belief in the simple power of music to brighten someone’s day is a key component of her teaching philosophy.
​
When not teaching, Melinda enjoys reading science fiction and fantasy, trying out new recipes in the kitchen, and playing with her cat, Ivy. 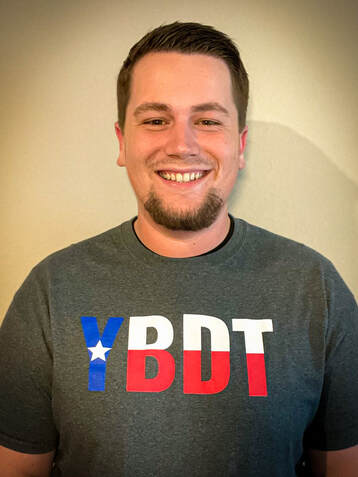 Blake Sykes  - Public Relations Lead
Blake Sykes is currently in his fourth year as Assistant Band Director at Robinson ISD. His responsibilities include the Seventh Grade Band, Beginner Trumpets, and the RISD Lesson Program, as well as assisting with the Eighth Grade Band and Robinson High School Bands.

Blake is a member of the Association of Texas Small School Bands, Texas Music Educators Association, Texas Bandmasters Association, and is excited to serve on the Executive Team of Young Band Directors of Texas as the Public Relations Lead.
​
Outside of work, Blake enjoys to be outdoors hunting, fishing, kayaking with his Shepherd/Lab mix puppy Ruger, and operate his Christmas light business – Sykes Lights. 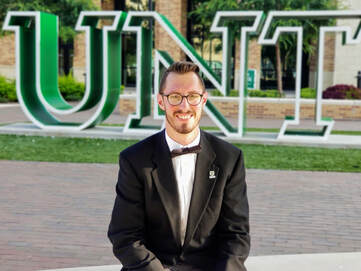 George Theodoroulis - Public Relations Assistant
George Theodoroulis is starting his second year as the Associate Director of
Bands at Corsicana ISD. He is a brass specialist whose responsibilities include Athletic Director of Bands, conducting the CHS Symphonic Band, and teaching beginner classes at Collins Intermediate.

George grew up in Athens, Greece, and moved to Katy, TX in the summer of
2010. While in secondary school he learned trombone and euphonium, and
began composing his own music while in high school. He attended the
University of North Texas to study music composition, but switched his major
after finding a passion for teaching. He is a founding member of the Beta
Gamma Omega Beta Chapter, and holds memberships in both the Texas
Music Educators Association, and Texas Bandmasters Association.

While not in the classroom, George enjoys composing and arranging music, catching up in the MCU, and playing board games. He resides in Corsicana with his beautiful Staffordshire Bull Terrier Ivey.​ 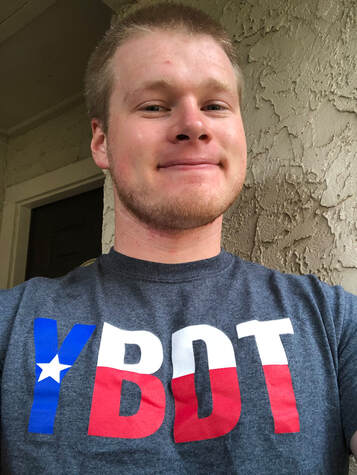 Jack Zellar - Regional Team Lead
Jack Zellar is in his fourth year teaching. He is an Assistant Band Director at Duncanville High School where he teaches the Symphonic Band and assists with the marching band. He spent his first year as an Assistant Band Director at William H. Byrd Middle School as well as teacher of beginner woodwinds at Daniel Intermediate School.
​
Prior to this Jack attended Sam Houston State University where he graduated Summa Cum Laude with a degree in music education. During his time at SHSU he was a member of the symphonic band and wind ensemble as a saxophonist. Jack was also a four year member of the Bearkat Marching Band serving as student assistant under Dr. Brian Gibbs. Jack is a member of the Texas Music Educators Association, Texas Bandmasters Association, and Assistant Regional Coordinator for Young Band Directors of Texas.
​
When Jack isn't working he enjoys crossfit, baseball, and in general loves to be outdoors. Jack resides happily in Dallas, Tx with his wonderful girlfriend Meghan and three dogs Sandy, Remy, and Beaux. 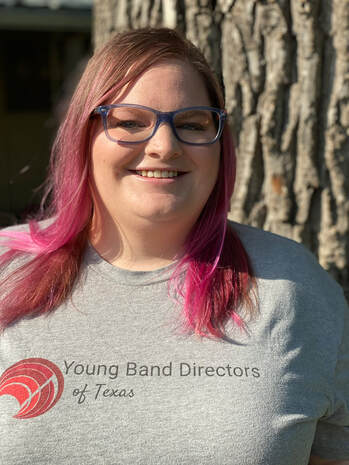 Sarah grew up in Ohio and attended Harding University in Searcy, Arkansas, where she earned her Bachelors of Music Education. She then graduated with her Masters of Music in Percussion Performance from the University of Central Arkansas before moving to Texas to start teaching.

Outside of work, Sarah loves spending time with her husband Andrew and their 3 cats. She enjoys playing video games and cross stitching. 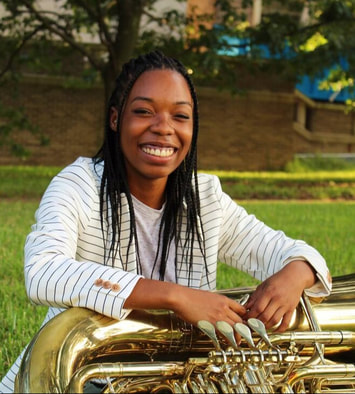 Quintavia Deshay - College Team Lead
​Quintavia is going into her second-year as an Assistant Director. In addition to
being one of the Co-Directors for Symphonic Band, Ms. DeShay assists the
Honors/Concert bands and teaches beginning Tuba, Euph, Trombone, and
Co-teaches the Clarinet, Horn and Double Reed classes.

When not teaching, Quin enjoys playing her instrument, wood burning, and
walking her dog Ivy. She is professionally affiliated with the Texas Music
Educators Association, Texas Bandmasters Association, and College Team Lead for Young Band Directors of Texas. 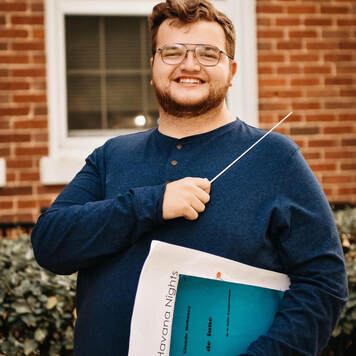 Jacob Dellinger - College Team Assistant
​Jacob Dellinger is in year one and a half of teaching. He currently is one of the music teachers at Iduma Elementary School in Killeen, Tx. In this role he serves as the assistant director of the choir, and the Orff ensemble. He is currently a performer with the Williamson County Symphony Orchestra.

Jacob is a graduate from the University of Mary Hardin-Baylor where he received his bachelor's degree in Music Education in the fall of 2021. While at UMHB, Jacob served as the tuba section leader for the Wind Ensemble, and the Blackshirt Cru Spirit Band for three consecutive years. He was also involved with the Brass Ensemble, Jazz Ensemble, and became a brother of Kappa Kappa Psi. Jacob got the chance to serve as a student conductor of the Kappa Kappa Psi Wind Ensemble in the fall of 2020. During this time, Jacob also served as a college representative for the Young Band Directors of Texas. He completed his student teaching in Leander ISD and Salado ISD.

​When he is not teaching, Jacob enjoys spending time with his family and his three pets, writing, listening to classical and jazz music, and exercising.