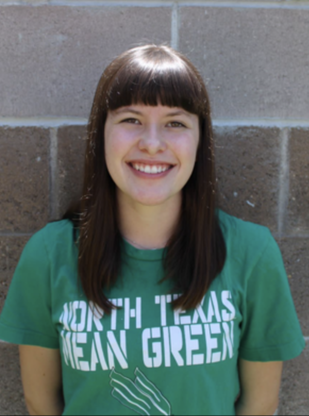 On campus, she serves as the Vice President for the Phi Tau Chapter of the music fraternity Mu Phi Epsilon. She also holds leadership positions within the North Texas Music Educator's Association and the Green Brigade Marching Band.

Outside of her studies, Audrey likes to play sports with her friends, drink coffee, learn songs on the ukulele, and fail to catch fish.

Audrey hopes to one day become a middle school band director, and she looks forward to helping each of her future students discover their unique relationship with music.
​ 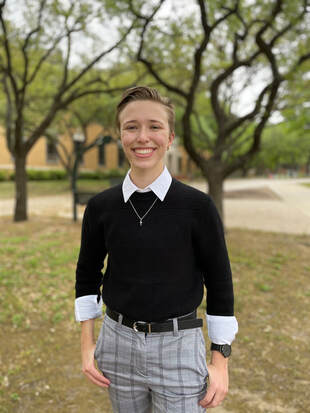 ​Abby Rieger is a second year music education major at the University of North Texas. Abby is from nearby Carrollton, Texas and currently serves as administrative committee chairperson and flute squad leader in UNT’s marching band, the Green Brigade. Most recently, they’ve performed with the North Texas Concert Band and the UNT flute choir.

Abby is also Vice President of Service for UNT’s newly established Kappa Kappa Psi Xi Beta chapter, and over the summer is also a drum major for the Santa Clara Vanguard drum and bugle corps. Outside of music, they like to read, do calligraphy, and spend time with family. Abby is excited to begin this new year with the YBDT team! 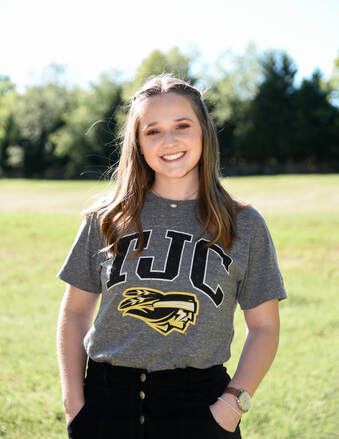 Emily Dean - Texas Christian University
Emily Dean is a Sophomore music education major at Tyler Junior College. She studies with Mr. Tom McGowan and performs with the TJC Wind Ensemble under the batons of Mr. Jeremy Strickland and Dr. Eddie Airheart. She also performs with the Apache Marching Band, Apache Punch Drumline, TJC Percussion Ensemble, and sings with both Jazz I & II Ensembles.

In addition to performing, Emily is a member of Kappa Kappa Psi, the National Honorary Band Fraternity, and serves her chapter and band as the Zeta Xi Historian. She is also a member of TJC Future Music Educators and the Phi Theta Kappa International academic honor society.

When Emily is not studying, she enjoys journaling, traveling, reading, hiking, and spending time with friends, family, and her dog, Tucker. Emily continues to teach Military Style Drum Majors and Percussion Private Lessons in East Texas as she has for the past three years.

Emily’s goals for the future include graduating from TJC with her Associate’s in Music, transferring to a four-year university to complete her Bachelor’s in Music Education, becoming a music educator and/or administrator, and furthering her education in grad school. 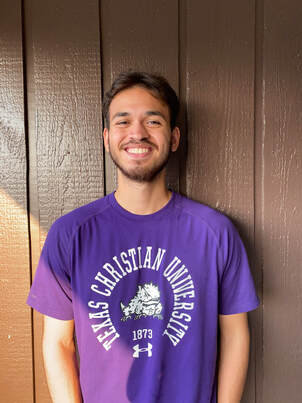 Currently, Aidan is the Band Instrumental Division Chair of TCU’s Music Educator’s Organization (MEO). He is also a member of TCU’s Chancellor’s Leadership Program and a Community Scholar.
​
When he isn’t studying or playing his instrument, Aidan enjoys running, biking, watching movies, and spending time with his close friends. After graduating, Aidan plans on being a band director and fostering a love for knowledge and music within his students. Additionally, he aspires to work with first generation college students. 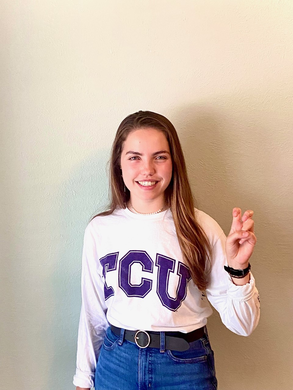 Currently, Anna is the Vice President for the TCU Music Educators Organization and a saxophone section leader in the Horned Frog Marching Band. She also serves as the alumni secretary for the Gamma Sigma Chapter of Kappa Kappa Psi (the National Honorary Band Fraternity) and is a member of the John V. Roach Honors College. Anna is a college intern for the Keller Area Youth Jazz Orchestra (KAYJO) where she coaches high school jazz musicians in an extracurricular jazz ensemble.

When she's not playing her instrument, Anna loves to spend time reading (especially the works of Brandon Sanderson), embroidering, and baking elaborate desserts. She is excited to pursue a career as a Texas band director upon graduation from TCU. 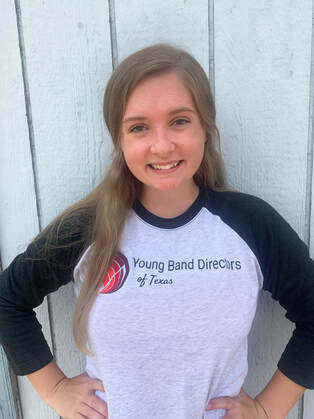 Glenna Stalcup - Texas A&M University-Commerce
Glenna Stalcup is a sophomore Music Education Major at Texas A&M University-Commerce. Glenna is a member of the horn studio and studies under Mr. Michael Morrow. Glenna is currently a member of the Wind Ensemble, under the direction of Mr. Phillip Clements, and has also performed with the Symphonic Band, under the direction of Mr. Allan Goodwind, the "Pride" Marching Band, and the "Pride of the Court"Basketball Band.

In addition to performing, Glena is a student worker, serving as one of the band librarians, and is a brother of Kappa Kappa Psi, National Honorary Band Fraternity.

In her spare time, Glenna enjoys spending time with her friends and family, serving at church, listening to musicals, and playing board games. When she graduates, Glenna aspires to further spread the joys and rewards of music to others as a band director. 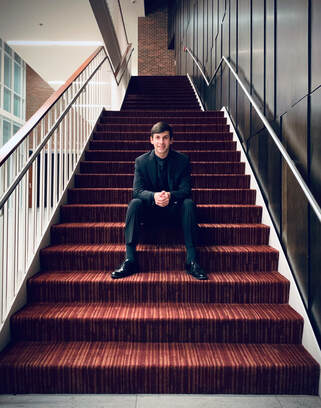 Jesse Vela - Texas A&M University-Commerce
Jesse Vela is a third year Music Education Major at Texas A&M University 0 Commerce. He is a member of the percussion studio, where he studies under Dr. Brian Zator, Mr Cory Doran, Mrs. Sandi Rennick, and Mr, Kent Hillman. Jesse is currently a member of the top percussion ensemble under the direction of Dr. Zator. He is a member of the TAMU-C Wind Ensemble under Mr. Phillip Clements, has performed with the Symphonic Band under Mr. Allan Goodwin, and is the Drum Captain for The "Pride" Marching Band.

In addition to performances, Jesse also serves at Lakepointe Church in Rockwall, TX. There he helps teach high school small groups, as well as light engineering on the media team. During the summer, Jesse works as a marching band tech for various high schools, and is a member of Mr. Frank Troyka's staff at the TAMU-C Summer Leadership Camp.

When he's not working or practicing, Jesse enjoys spending time with family and friends, watching movies, and reading. After graduating, Jesse plans to be a band director in order to develop students into the great people they have the potential to be.
Andrea Wilson - Texas A&M University-Commerce

Cristina Cruz - University of Mary-Hardin Baylor
Cristina Cruz is a College Representative for Young Band Directors of Texas. She graduated from Red Oak High School in 2019 and is currently in her second year at the University of Mary Hardin-Baylor. Her primary instrument is trombone and she can’t wait to meet her future students! 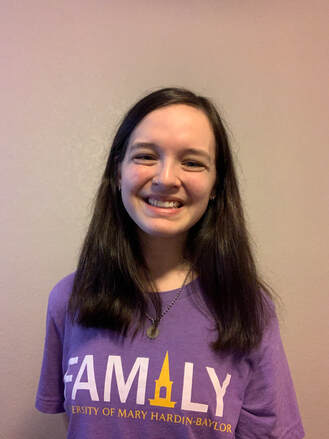 Brea Knight - University of Mary-Hardin Baylor
Brea Knight is a Junior Music Education major at the University of Mary Hardin-Baylor. She has played the flute for the past 10 years and currently studies under Sheryl Goodnight. She has performed with the UMHB Wind Ensemble, Blackshirt Cru Spirit Band, and Woodwind Ensemble under the direction of Dr. Nils Landsburg, Professor Michael J. Garasi, and Mrs. Michelle Palmer.

In addition to that, Brea Knight is also an active member of Kappa Kappa Psi and is going on her second year on the Executive Council as the Service Coordinator. Brea Knight is also currently serving as the flute section leader for the Blackshirt Cru Spirit Band.
​
In her spare time, Brea enjoys singing, reading, drawing, and hanging out with her friends. After graduation, she wants to inspire and guide her students to be the best that they can be and make sure they strive for success. Brea is very excited to serve on YBDT and can’t wait to meet her future students! 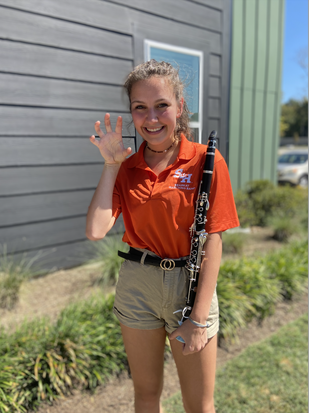 Claudia’s primary instrument is clarinet and secondary is oboe. Her ultimate goal in life is to introduce fine arts to the children in Venezuela and demonstrate how music can be the perfect distraction from reality.

Aside music, Claudia also enjoys being an Orientation Leader and helping freshmen with the challenging transition into college.

With her free time, one can find Claudia going on runs with her dog, rock climbing, or binging Gilmore Girls.