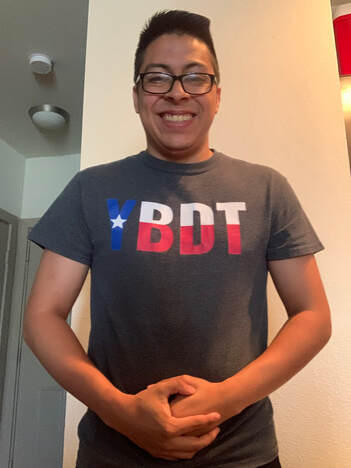 Adrian Villalobos - North Representative
Adrian Villalobos is the Head Band Director at Desoto West Middle School. In this role, he directs the West Middle School Honors Band, assists with the Symphonic Band, and teaches beginning band classes. He spent his first year as the assistant director before moving up to Head Director last year. This will be his 3rd year as a band director.

Originally from Fort Worth, Texas, Adrian went to University of Texas at Arlington where he majored in Music Education. His primary instrument is Euphonium. While at UT-Arlington, he served as section leader for the Maverick Marching Band and was heavily involved in Kappa Kappa Psi in a variety of roles including treasurer and chapter president. Adrian is a member of the Texas Music Educator's Association, Texas Bandmaster's Association, and has been active in Young Band Directors of Texas. 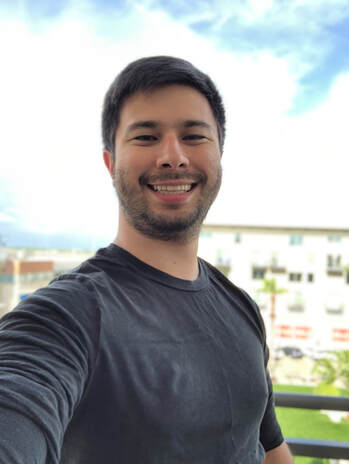 Collin Beavers - East Representative
Collin Beavers is currently in his fourth year as the Assistant Director at Angleton Junior High School in Angleton, Texas. Collin graduated from the University of Texas at Arlington in 2017, graduating with a degree in Music Education. While at UT Arlington he studied saxophone with Tim Ishii, Michael Morrison, and Chris McGuire. Collin was an active member in multiple ensembles including the Maverick Marching Band, Jazz Ensemble, MavBrass Basketball Band, Saxophone Choir, and the Symphonic Winds where he served as principal saxophonist. In 2015, Collin performed with the Santa Clara Vanguard Drum and Bugle Corps on mellophone.

At Angleton Junior High, Collin teaches the flute, double reed, clarinet, and saxophone beginning classes, as well as teaching the Symphonic Band. He also assists with the Wind Ensemble and Concert Band, while also managing the private lesson program at Angleton Junior High.

When Collin is not working he enjoys working out in the gym. He is also a coffee enthusiast, as well as an avid anime fan. He resides in Pearland, TX. 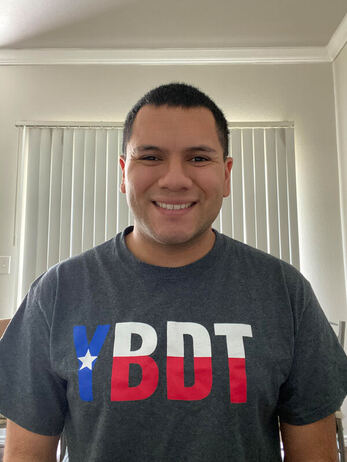 Eddie Garcia - East Representative
Eduardo Garcia is in his fourth year as an Assistant Band Director at Spillane Middle School in Cypress, Texas. His teaching responsibilities include the Concert Winds, Beginning Clarinet, Beginning Trombone, and Beginning Double Reed classes. During his time at Spillane, his band has earned Sweepstakes at UIL Concert and Sight Reading Evaluation and Runner UP at the Bridgeland Festival.

Prior to teaching, Eddie attended the University of Texas at Austin, where he holds a Bachelor of Music Studies degree. During his time at UT, Eddie was a Section Leader in the Longhorn Band, member of the Longhorn Pep Band and a member of the Wind Ensemble.

​His professional affiliations include The Texas Music Educators Association and the Texas Bandmasters Association. When not teaching, Eddie loves to travel, do yoga, and perform with the Cypress Symphonic Band. 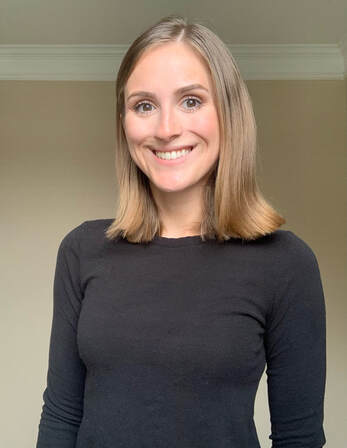 Jessica Longlois is in her second year teaching and serves as Assistant Band Director at West Lake Middle School. There, she teaches beginner clarinets, double reeds, french horns, and conducts the Concert Band. 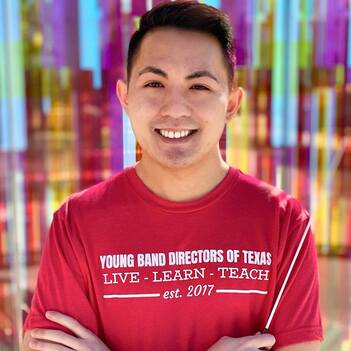 Joseph is a graduate of Sam Houston State University with a Bachelor's degree in Music Education. He studied with Dr. Patricia Card, Dr. Matthew McInturf, and Dr. Jacob Sustaita. During his time at SHSU, he was a member of the Wind Ensemble and Symphony Orchestra, serving as principal clarinetist for two years.

Away from the band hall, he enjoys spending time with his friends and family, and running his small business on Etsy!​ 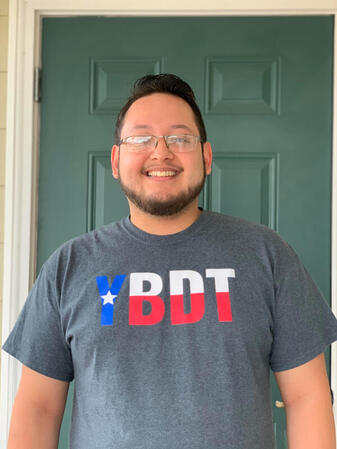 Sergio Olivares - East Representative
Sergio Olivares is in his fourth year of teaching and serves as the Assistant High School Director at Brownsboro ISD. He co-teaches the Junior Varsity High School band, teaches beginner flute and saxophone, and assists with both middle school bands.
​
Sergio attended Stephen F. Austin State University where he graduated Cum Laude with a degree in Music Education. During this time at SFA, he performed in many ensembles including the SFA Flute Choir, the Symphonic Band, the Wind Symphony, and the Lumberjack Marching Band. Sergio is a member of the Texas Music Educator Association and the Texas Bandmasters Association.

​Sergio lives in Tyler, Texas with his wife, Jessica and their son, Gabriel. In his time off, he likes to spend quality time with his family and watch anything related to superheroes. 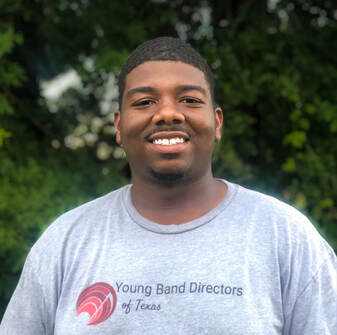 Jazz Band, Brass Quintet, and Low Brass Quartet. Jaylon also worked as an undergraduate assistant in the Music Department's main office. Additionally, he was an active member of the International Honor Society in Education, Kappa Delta Pi Rho Rho Chapter, and the treasurer of Kappa Kappa Psi, Lambda Pi Chapter. He completed his degree by student teaching at Lindale ISD.

In May of 2020, Jaylon completed his Master of Education degree with a Principal Certification from The University of Texas at Tyler. His Action research thesis paper was over The Necessity of Closing the Gaps in Economically Disadvantaged Schools.
​
Jaylon has a strong passion for working with children, music and learning new things. Outside of his musical studies and involvement, Jaylon has volunteered with the non-profit organizations East Texas Food Bank and Keep Whitehouse Beautiful, as well as his church's Vacation Bible School. Jaylon's hobbies include maintaining saltwater and freshwater aquariums, swimming, traveling, lawn work, and sleeping when his schedule allows. 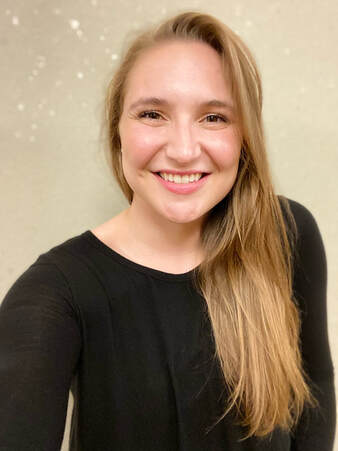 Jessica Calvit - West Representative
Jessica is very excited to begin her second year of teaching as an Assistant Band Director at Lubbock-Cooper High School. There, she directs the Jazz Band, co-directs the Concert Band, assists with teaching the Pirate Pride Marching Band, and assists with the middle school programs. 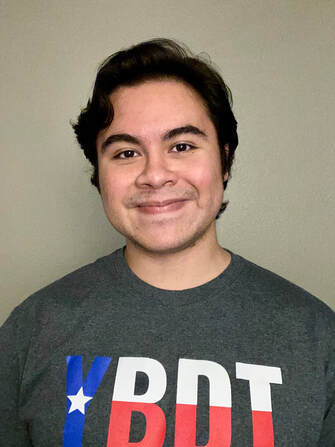 Jose Fernandez - West Representative
Jose Fernandez is in his fourth year of teaching. He is the Assistant Band Director at Estacado Early College High School where he teaches the Wind Ensemble, Concert Band, Marching Band, Pep Band, and Color Guard. Jose is a member of the Texas Music Educators Association, Texas Bandmasters Association, and Young Band Directors of Texas serving as a Regional Representative for West Texas.

Jose is a 2018 graduate of West Texas A&M University where he earned a degree in music education, while also studying saxophone under Dr. James Barger. During his time at WTAMU, he was a member of various ensembles as a saxophonist. Jose was also a member of the color guard in the Buffalo Marching Band.
​
When Jose isn't working he enjoys video gaming, reading, and retail therapy. He currently resides in Lubbock, TX. 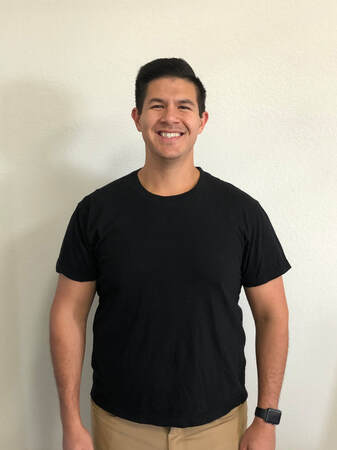 Tyler Simon - West Representative
Prior to his appointment at Franklin HS, Tyler Simon served as the Associate Director at Clear Creek High School in League City, TX for three years. While at Clear Creek HS, he was the conductor for the concert, symphonic, and jazz bands. He also established the first jazz band program and started the first chapter of Future Music Educators. Under his tenure, the symphonic and concert bands received numerous excellence and superior ratings at the UIL concert and sight-reading contest.

Tyler is a graduate of Texas Tech University where he attained degrees in Music Education and Music Performance. While at Texas Tech, he was the Drum Major for the Goin’ Band from Raiderland, studied abroad at the Royal Northern College of Music in Manchester, England, and performed with the Texas Tech Concert band as a soloist.

​Tyler is an advocate of marching arts and music education. He performed with the Blue Knights Drum & Bugle Corps in 2010 and 2011 and in 2012, he won a championship with the Blue Devils Drum & Bugle Corps. Tyler has taught several SaSi drum major camps working with the best and brightest students from schools around Texas on their leadership and conducting skills. He also is one of the founding members of Young Band Directors of Texas. He has presented clinics at the TMEA and TBA conventions on teaching young directors how to support themselves and avoid burnout. Tyler will serve as the Regional Representative for the Southwest Region of Texas.

Tyler is an active performer, he previously held the title of principal euphonium for the Houston Brass Band, prior to his appointment at Franklin HS. Tyler resides in El Paso with his wife, Lauren, a Franklin HS alumni, and their two dogs, Ella & Finn.